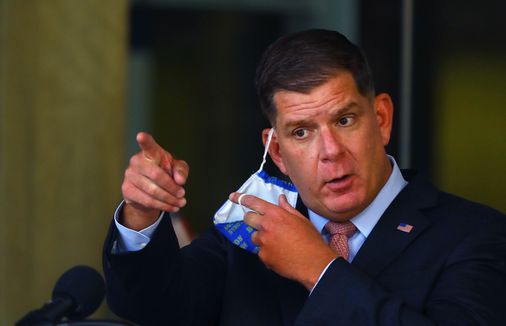 He continues to have significantly more cash in the bank than City Councilors Andrea Campbell and Michelle Wu, who have announced they are running for mayor in 2021.

May saw the campaign spend more than $530,000, but that figure included a half-million-dollar donation to the Boston Resiliency Fund, which was set up to help those most in need during the COVID-19 pandemic.

Some political observers say Walsh’s September spending could represent a ramp-up to a reelection bid.

“An uptick in his spending indicates he’s not leaving; it looks more like a preparation,” said Louis DiNatale, a Massachusetts pollster.

Ray La Raja, a political science professor at the Univeristy of Massachusetts Amherst, said politicians who are Walsh’s age “are always running for something.” (Walsh is 53.) La Raja said he wouldn’t be surprised if the Walsh campaign is spending money on focus groups.

“He’s trying to see how tough the race is going to be,” La Raja said.

Candice Nelson, a government professor at American University, said “you can at least assume he’s considering” a reelection bid.

“Why else would he be doing this?” Nelson asked of his campaign activity.

She added: “We’re a year out. If he’s going to run, it’s probably time to start gearing up.”

Last month, the Walsh campaign paid SKDKnickerbocker, a Washington political consultant and strategic communications firm that counts Joe Biden’s campaign among its clients, $36,000. The campaign also paid more than $14,000 to LB Strategies for consulting expenses, according to records.

Campbell’s campaign had more than $369,000 in cash after spending more than $9,000 and raising $94,000 for the month, according to state records. Campbell announced her candidacy Sept. 24.

“I am so humbled by the enthusiasm and support we have seen in just the first week of my campaign,” Campbell said in a Monday statement. “I am looking forward to building this movement in partnership with residents across this city to transform systems to ensure Boston works for everyone.”

Wu’s campaign had $439,000 on hand at the end of September, according to state records, after spending more than $45,000 for the month and raising $138,000. Wu announced her candidacy Sept. 15, but news of her political intentions had broken a week earlier, when Walsh said the councilor had told him she would be running for mayor.

Walsh has deflected questions about his reelection plans in recent weeks, saying he’s focused on his job. Boston’s voters have not kicked out an incumbent mayor in more than 70 years.