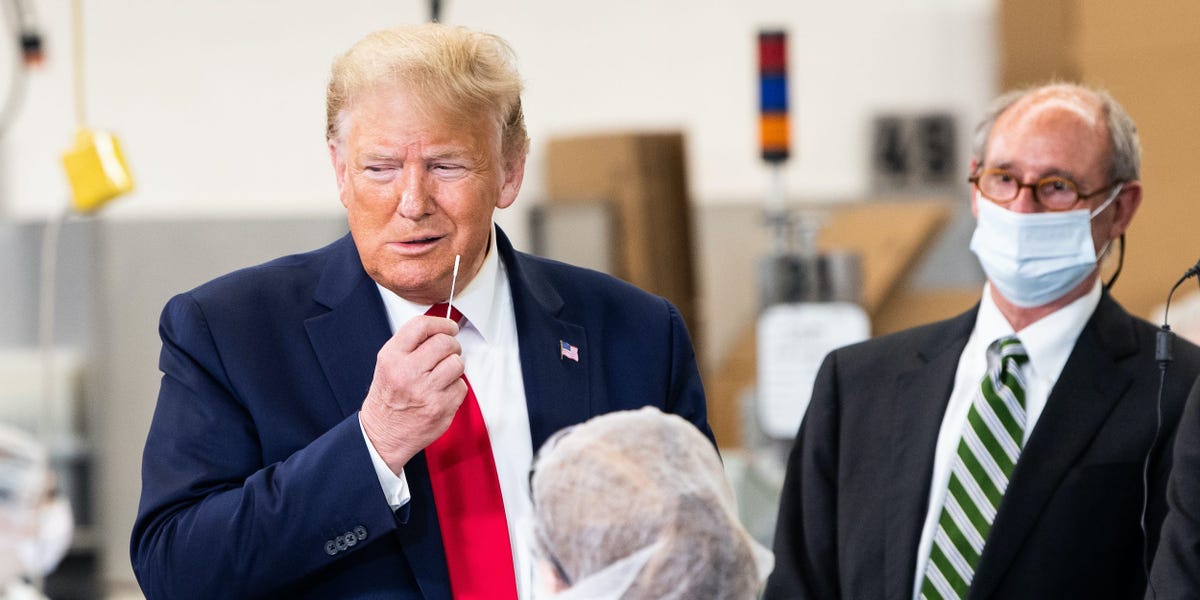 Despite the seismic implications of the president of the US contracting a deadly and highly infectious disease with no cure, the White House is still providing very little basic information about President Donald Trump’s coronavirus status.

Aside from his positive-test announcement on Friday — which led to him being hospitalized with COVID-19 for three nights — the last time Trump was on the record talking about taking a test was in May, when he said, “I tested positively toward negative.”

Between Trump’s “positively toward negative” disclosure on May 21 and the tweet confirming he had tested positive for COVID-19 on October 2, the White House would not point Insider toward any specific instances when Trump even took a test.

At one point in July, White House press secretary Kayleigh McEnany said Trump was tested “multiple times a day.” He contradicted her later in the day and said he couldn’t recall taking more than one in 24 hours.

McEnany, along with other White House officials, such as spokeswoman Alyssa Farah, have declined to specify when Trump takes coronavirus tests or the last time he tested negative.

“I can’t reveal that at this time. Doctors would like to keep it private,” Farah said on Thursday.

The president attended 113 public events between his last known negative test and the night before he disclosed he had COVID-19, according to a database of his travel and events calendar from Factba.se, a site with a variety of Trump-related databases.

Insider asked the White House repeatedly on Thursday how often the president is tested, when his last test was, and if they had disclosed any tests taken since May 21.

“The president is tested regularly,” a White House spokesman said in an email.

He did not respond when asked to specify how frequently the president is tested.

Many events, few precautions from Trump

Other than the rare occasion when he wears a mask in public, like the first time he did in July, the president has mostly flouted basic public-health precautions. He’s also rarely enforced social-distancing rules and mask-wearing at his rallies and other public events.

Trump’s events have varied in size and density, but there have been a few noteworthy examples that posed more risk than others: