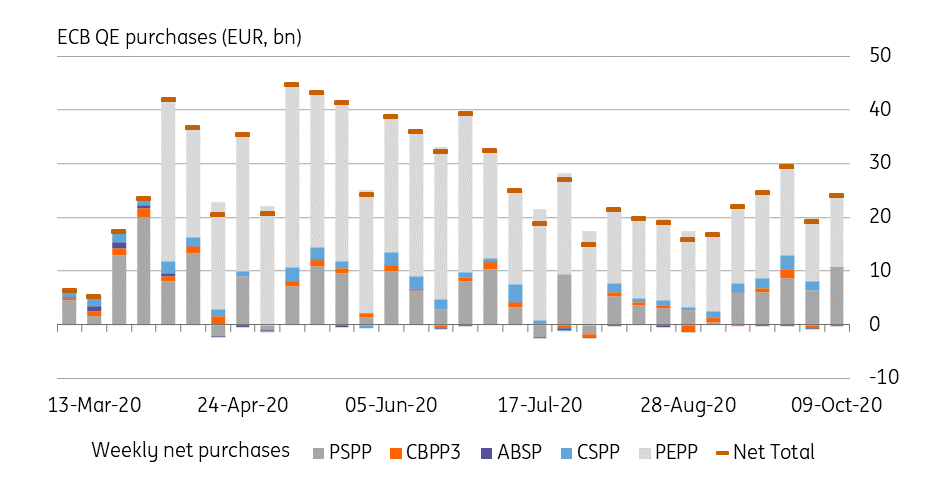 In an environment where core rates are at the bottom of their recent range, and offer only dismal carry (consider that Bund yields are again flirting with their repo rate driving carry to zero), it does not necessarily follow that demand should be displaced to higher yielding alternatives, such as peripheral debt. The second, more important, condition is that support from the ECB and the EU will result in a reduction in the stock of peripheral bonds available for investors to buy over the coming years.

This has resulted in the 10Y Italy-Germany spread reaching our target of 125bp earlier than we expected (we had Q1 2021 penciled in). In the near-term, we expect demand for carry and the build-up to the coming ECB meeting will trigger more tightening. There are some potential hiccups along the way however.

But expectations are already high

It is not yet certain when the EU recovery fund (NGeu) will be operational, but it seems that most of the 2021 disbursements will take place in the second half of the year. While this might still be a basis for recipient countries to reduce their debt issuance earlier in the year, and thanks to earlier SURE payments, we do not think markets would take the news of the delay in the fund’s launch well.

As we have argued earlier, central bank support should play a more important role in driving spreads tighter One concern we have is that markets are already pricing a high probability of central bank easing more than two months ahead of its likely announcement date. Another potential cause for disappointment is if, as our economics team expects, PSPP is boosted instead of PEPP, its more flexible alternative. We suspect a wave of profit-taking might cause a temporary re-widening in sovereign spreads ahead of the October 29th ECB meeting.

Total ECB net asset purchases increased to €24.2bn in the week ending 9 October. Hereof €13.4bn was conducted via the pandemic emergency purchase programme (“PEPP”) and €10.5bn via the public sector purchase programme (“PSPP”), which suggests that the focus on the public sector and away from spread products that was disclosed with the detailed PEPP data for the months of August and September is still ongoing in light of benign market conditions.

The remaining PEPP envelope sits at €765bn which would allow the ECB to purchase slightly more than €20bn on average per week until the programme runs out mid next year. Current volumes remain well below that threshold, leaving more room for future intervention should needs arise.

Italy selling 3Y/7Y/30Y is the highlight of today’s supply slate which also features a 7Y Dutch bond reopening and bill auctions from Spain, Belgium, Finland, and the ESM. Bloomberg reported yesterday that Slovenia might carry out a 30Y bond sale today.

In data, the Zew survey is the main release in the morning. Things will get livelier in the afternoon with US small business optimism, and CPI.

The perceived centre ground among ECB governing council members is shifting towards easing. Today’s comments from Knot, typically sitting among the hawkish wing of the governing council, will be particularly important in assessing how close hawks are to coming around to the idea. VP De Guidos signaled overnight that the December forecast will allow for a reassessment of the PEPP envelope.

Content Disclaimer: This publication has been prepared by ING solely for information purposes irrespective of a particular user’s means, financial situation or investment objectives. The information does not constitute investment recommendation, and nor is it investment, legal or tax advice or an offer or solicitation to purchase or sell any financial instrument. Read more.