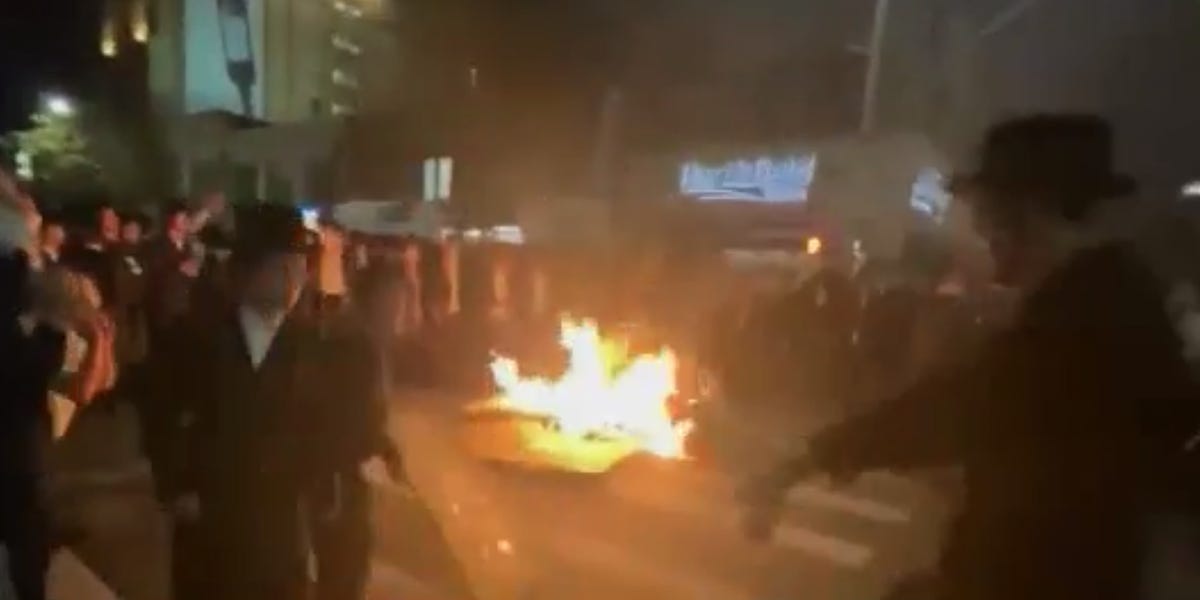 Members of an Orthodox Jewish community started a bonfire in the middle of a Borough Park, Brooklyn street on Tuesday night, as the community protested a new local lockdown.

Borough Park is among nine New York City zip codes set to go into a new lockdown on Friday, to address a spike in coronavirus cases. The lockdown, imposed by Mayor Bill de Blasio and Gov. Andrew Cuomo, will include closing schools and nonessential businesses, banning mass gatherings, and restricting houses of worship to no more than ten people.

All nine neighborhoods are home to Orthodox Jewish populations, according to The New York Times, and the lockdown announcement comes as they celebrate the Sukkot holiday.

As The Times reported, officials have had a hard time getting members of these communities to follow COVID-19 precautions.

Local leaders told the newspaper that the spike in infections is due in part to their beliefs that they had achieved herd immunity and in various coronavirus misinformation spread by President Donald Trump. The president has an overwhelming support in the Orthodox community, which traditionally backs conservative Republican candidates.

At one Tuesday night gathering on 13th Avenue, in Borough Park, protesters lit a fire and started throwing cardboard boxes and face masks into the flames, according to NBC New York.

Protesters also chased away two sheriff’s deputies who responded to the scene, according to NBC New York.

The New York Police Department told NBC New York no arrests or summonses were issued, but one person was injured early Wednesday morning “from a physical confrontation with other congregant(s).”

The New York Post reported that at one gathering on 13th Avenue, protesters shut down the street to vehicular traffic and chanted “Jewish Lives Matter.”

“It’s called civil disobedience, we can fight back,” community activist Heshy Tischler said as he tore up his face mask at one of the gatherings, according to the Post.

Earlier in the evening, Councilman Kalman Yeger told the crowds: “We are not going to be deprived of the right that we have in America, like everybody else in America, the right to observe our religion.”

Yeger was among a group of other community leaders who wrote a letter deriding the lockdown decision.

“We are appalled by Governor Cuomo’s words and actions today. He has chosen to pursue a scientifically and constitutionally questionable shutdown of our communities,” said the statement from Yeger, State Sen. Simcha Felder, Assemblyman Simcha Eichenstein, and Councilman Chaim Deutsch.

The leaders wrote that it was “disgraceful” to target “our community in the midst of our Jewish holidays.”

Catholics in Marine Park, another Brooklyn neighborhood, also protested the local lockdowns earlier Tuesday, gathering outside of Good Shepherd Catholic Academy. The protest included mostly parents, staffers, and children of the school, which was closed under the restrictions.

The principal of the school, John O’Brien, told the Post he was “disappointed” with the decision.

“We’ve had one month of school where the boys and girls have been in the building every day. We’re following all the guidelines that we’re supposed to. Thank God we’ve had no positive cases, nobody’s been sick, and still we have to close today,” O’Brien said.

Brooklyn Bishop Nicholas DiMarzio also slammed the decision, pointing out that Catholic churches in Brooklyn and Queens “have not had any COVID outbreaks or significant cases since reopening on July 5 to 25% capacity.”