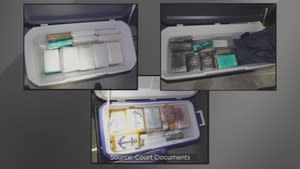 Homeland Security Agents say a money laundering investigation out of South Florida led them to a storage unit in Orlando full of millions of dollars worth of cocaine.

Investigators say agents were already watching Wayne Stout, Jr. when he rented a car in Miami and drove to a storage facility on Edgewater Drive in Orlando.

According to court documents, Stout was seen taking a cooler and a duffel bag from one of the storage units and putting them in his rental car before driving to a restaurant in Winter Park.

Agents continued watching as another car pulled up, driven by a man later identified as 55-year-old Avery Lans. Stout was seen giving the bag to Lans before they both left the area.

Investigators say they continued tailing Lans until he appeared to identify the undercover agents following him and began driving recklessly through traffic in an attempt to escape.

READ: Florida man bitten by an alligator he mistook for a dog

At one point, agents said they saw Lans throw the duffel bag out of the car. Lans was eventually pinned in and taken into custody.

In the bag, agents found five bricks of cocaine weighing about 12 pounds.

Investigators went on to search the storage unit Stout accessed and found several large coolers stuffed with another 109 bricks of cocaine, each believed to be kilograms worth $30,000 each.

Lans was in federal court Tuesday for a bond hearing. The judge ruled he was a danger to society and a flight risk and ordered him to remain locked up with no bond.

Stout was picked up in South Florida and has a hearing Wednesday morning to determine whether he’ll be brought back to Orange County to face charges.