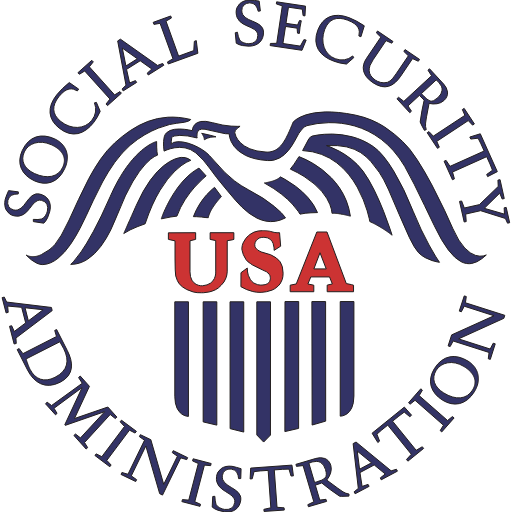 The September inflation report, released this morning, is by far the most important report of the year, because it sets both the cost-of-living adjustment for Social Security and also the future inflation-adjusted rate on U.S. Series I Savings Bonds.

First, the basics: the Consumer Price Index for All Urban Consumers increased 0.2% in September on a seasonally adjusted basis, the Bureau of Labor Statistics reported. Over the last 12 months, the all-items index increased 1.4%. That result exactly matched the consensus forecast. Core inflation, which strips out food and energy, also increased 0.2% and was up 1.7% year-over-year, slightly less than the consensus.

The Social Security Administration will set next year’s cost-of-living adjustment based on the average inflation index for July, August, and September, using data from a little-followed index: the Consumer Price Index for Urban Wage Earners and Clerical Workers (CPI-W).

For September, the BLS set the CPI-W index at 254.004, marking an increase of 1.5% over the last 12 months. But the annual increase doesn’t figure into the SSA calculation, which looks only at the months of July, August and September. Based on that data, the Social Security COLA will rise 1.3% for payments beginning in January.

Here are the numbers used in this calculation: 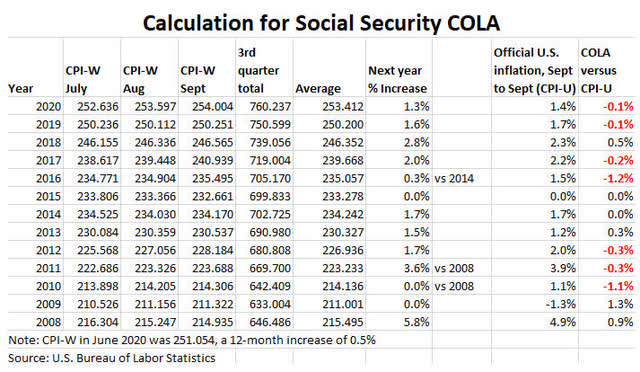 As the chart shows, the Social Security COLA at 1.3% will again lag behind official U.S. inflation at 1.4%. And that is happening even though CPI-W year-over-year is running higher than CPI-U. The SSA’s unique formula — taking the three-month average of July to September data — tends to “smooth out” any sharp increases, as it did this year. I have argued that this formula shortchanges seniors, and it will again in 2021.

The average Social Security beneficiary in 2020 receives $1,503 in monthly payments. With the 1.3% increase, that payment will rise to about $1,523 in January 2021, or an increase of about $20 a month. However, it looks likely that the Medicare Part B premium will also increase in 2021, wiping out part of that COLA.

With this final piece of data, the I Bond’s new inflation-adjusted variable rate (technically called the inflation rate) has been set in stone at 1.68%, based on the six-month inflation rate of 0.84%. That’s up 62 basis points from the current variable rate of 1.06%. Here are those numbers:

This is positive news for investors in I Bonds. An I Bond purchased today would earn 1.06% for six months, and then 1.68% for the next six months, creating an annual return of about 1.37%, better than any other very safe short-term investment. (I am assuming the Treasury will hold the I Bond’s fixed rate at 0.0% at the November reset, which seems almost certain.)

Should you buy before or after the rate reset on November 1? Should you consider I Bonds as a short-term investment? I will be writing more about I Bonds before the rate reset. If you haven’t bought I Bonds in 2020, up to the $10,000 per person purchase cap, I’d recommend taking a look at them before the end of the year.

The September increase of 0.14% in non-seasonally adjusted inflation means that the principal balances of all TIPS will be increasing by 0.14% in November. Here are the new November Inflation Indexes for all TIPS.

For the first time in several months, the consensus forecasts for inflation were pretty accurate, with U.S. inflation continuing in the “low to moderate zone.” The price of gasoline, which often triggers strong swings in U.S. inflation, increased only 0.1% in the month and remains down 15.4% over the last 12 months. Food prices were flat, but are up 3.9% year over year. Prices for medical care services were also flat, but up 4.9% year over year.

The one outlier in the September report was the cost of used cars and trucks, up a strong 6.7% in the month and 10.3% over the last 12 months. The BLS said that one increase was a major factor in the overall 0.2% inflation rate.

Here is the inflation trend over the last 12 months, for both all-items and core inflation, showing the sharp deflationary trend at the beginning of the COVID-19 pandemic in March and then the gradual rise as stimulus programs fed money into the U.S. economy: 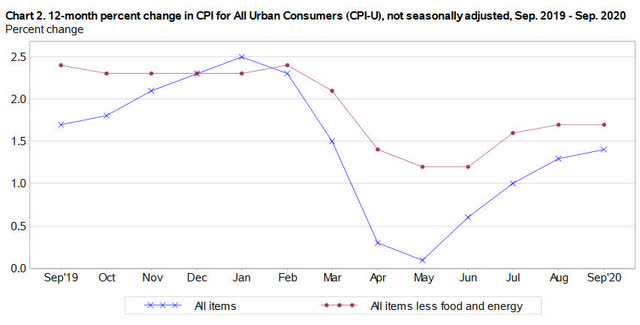 With gasoline prices holding steady, combined with uncertainty over future stimulus spending, inflation should remain under control in the near term. The longer term is a foggy picture and depends on future efforts to control the pandemic.

The September inflation report reflects a trend of mild inflation and shouldn’t cause any concern at the Federal Reserve, which is committed to getting U.S. inflation above 2.0% for a long period of time. We can expect short-term interest rates to remain very close to zero, for many months to come.

Conclusion. In this environment, inflation-adjusted I Bonds look like a very attractive investment, offering a real return (after inflation) of 0.0%, even as real yields across all maturities are deeply negative. I Bonds are a very safe, very conservative investment – and have the added bonus of out-performing nearly every other safe investment.

Additional disclosure: David Enna is a financial journalist, not a financial adviser. He is not selling or profiting from any investment discussed. The investments he recommends can purchased through the Treasury or other providers without fees, commissions or carrying charges. Please do your own research before investing.