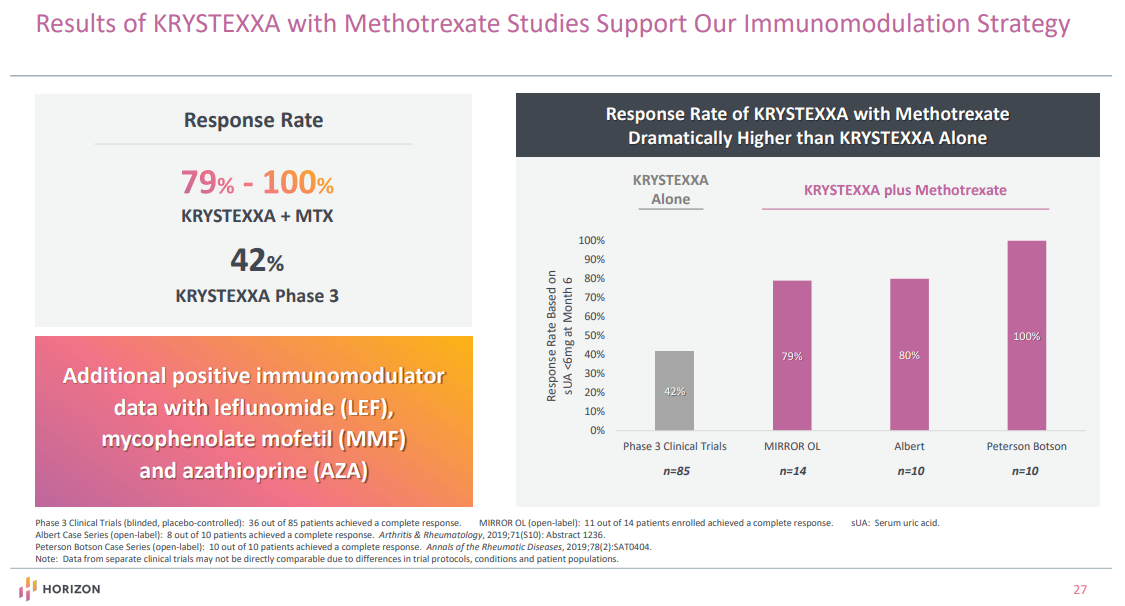 Horizon Therapeutics’ (HZNP) competitor Selecta Biosciences (SELB) reported results phase 2 of SEL-212 (pegadricase plus ImmTOR) which failed to beat Krystexxa in refractory gout patients. SEL-212 achieved a numerically better response rate at 3 and 6 months, but the results failed to reach statistical significance. SEL-212 results confirm its prior efficacy profile which is only moderately better than Krystexxa monotherapy and it does not represent an apples-to-apples comparison as SEL-212 has an unfair advantage of the addition of ImmTOR, Selecta’s immunomodulator, to pegadricase, which is the biologic candidate with the same mechanism of action as Krystexxa (pegloticase).

I believe SEL-212’s phase 2 results further solidify Krystexxa’s likely leading position in the refractory gout market given the emerging and very strong combination data of Krystexxa with approved immunomodulators (mainly methotrexate). I expect the combination to achieve much greater efficacy in the ongoing MIRROR study than SEL-212 will in its phase 3 study against placebo.

Selecta’s initial pitch to investors on SEL-212 was not only that it should achieve better efficacy than Krystexxa, but that it will also have a better safety profile. In my article on Horizon last year, I noted this trial may not be relevant because of the MIRROR study where Horizon is studying Krystexxa and methotrexate combo. Not only was this trial not relevant, but it was also damaging to Selecta’s valuation given the primary endpoint failure, and it also turned out that there were no differences between SEL-212 and Krystexxa in the phase 2 study in treatment-related side effects, serious side effects, or infusion reactions.

On the efficacy side, Selecta once again resorted to per-protocol (‘PP’) assessments versus intent-to-treat (‘ITT’) assessments, though, granted, it did report ITT data as well. I will only analyze ITT data because this is what will be included in the product label if SEL-212 is to be approved in a few years.

The primary endpoint in the study was serum uric acid control at month 3 and 6 combined. SEL-212 was only numerically better with a 53% response rate versus 46% for Krystexxa and failed to achieve statistical significance.

And while the trial failed to show the superiority of SEL-212, Selecta’s combo is more than likely to secure FDA approval since it has comparable to slightly better efficacy than Krystexxa monotherapy, and since there is basically no placebo response in refractory gout. But, I fully expect Krystexxa to be a dominant refractory gout therapy if/when SEL-212 hits the market due to the emerging and significantly superior clinical data showing the addition of immunomodulators such as methotrexate to Krystexxa significantly improves the response rate in refractory gout patients. And this is not really surprising if you think about it as this is exactly what Selecta is doing with SEL-212.

Selecta’s gout biologic pegadricase is highly immunogenic, much more so than Krystexxa. Patients develop antibodies against pegadricase and its monotherapy response rate in phase 1 trial was 20% after the first month of treatment and would likely be close to zero or zero at 3 and 6 months (but it wasn’t tested longer than a month). The addition of ImmTOR brings the combo’s response rate to the 50-60% range, based on the available phase 1 and phase 2 data, including the head-to-head data against Krystexxa. 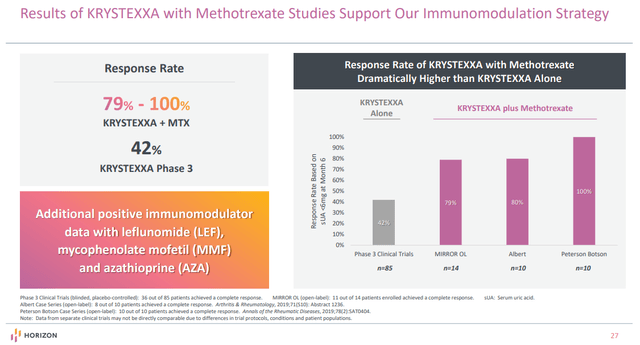 I would have no doubt which combo to use. All else equal (and there is no apparent safety advantage of SEL-212 to Krystexxa), physicians are more likely to use Krystexxa and methotrexate. And it is better to say that the majority of physicians would continue to use the Krystexxa and methotrexate combo because off-label use is increasing rapidly, from 4% in 2018 to 15% in 2019 and likely mid-20s or higher this year. 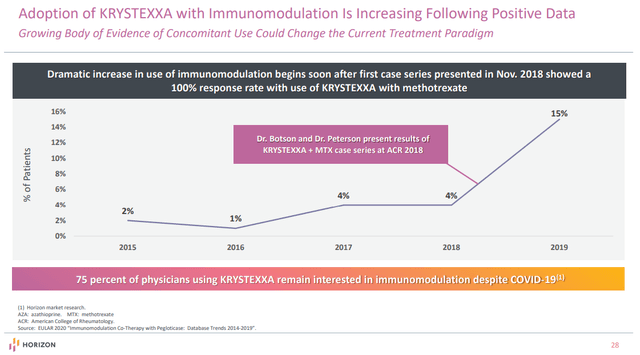 And time is on Horizon’s side as well. Selecta wasted more than a year doing this head-to-head study against Krystexxa which delayed the start of SEL-212’s registrational phase 3 study. Selecta expects to complete the two phase 3 studies in 2H 2022 and based on that projection, SEL-212 won’t reach the market before late 2023 or 1H 2024. By that time, Horizon should solidify its leadership position with an expanded label in late 2021 or 1H 2022 since the MIRROR trial is fully enrolled with data expected in 1H 2021.

Refractory gout is a very significant market for Horizon and also for Selecta and its partner Sobi. There are approximately 100,000 patients in the U.S. and Krystexxa was used in approximately 4,000 in 2019, leaving a lot of room for growth in the following years. The addition of methotrexate to Krystexxa (and potentially other immunomodulators) should significantly increase market penetration, especially when Horizon is free to promote the use of the combination.

In 2019, Krystexxa generated $342 million in net sales and as mentioned above, Horizon noted that approximately 4,000 patients were treated. If all patients are treated with the Krystexxa and methotrexate combo in the future, the annual sales for the same 4,000 patients should be in the $500-600 million range, as I believe the average number of vials per patient should grow by 50% or more. This also means that 8% market penetration would be enough to get to $1 billion in annual net sales.

My current estimate is that the addition of the combination to Krystexxa’s label would add $800 million to $1 billion in annual sales by 2026 and I believe there is room for upward revisions in the following years, depending on actual MIRROR data (especially if the response rate is above 80%) and Horizon’s commercial execution.

Krystexxa sales are under pressure this year due to the pandemic as gout patients are immunocompromised and reluctant to go to infusion centers to receive Krystexxa. Because of this situation, Horizon expects Krystexxa net sales to be flat this year. I believe we will see significant growth acceleration in 2021 and especially in 2022, which is the time MIRROR study results are widely disseminated and the time when Krystexxa’s label should get expanded to include the use in combination with methotrexate.

Selecta’s SEL-212 data confirmed what I’ve been suspecting for some time – that it is not significantly superior to Krystexxa. The use of methotrexate with Krystexxa should also significantly boost the response rate in the MIRROR study and solidify Horizon’s leadership position in refractory gout. I expect SEL-212 to succeed in the phase 3 study against placebo with a 50-60% response rate, which won’t come close to my estimated response rate of Krystexxa and methotrexate combination of 70-80%.

And while Krystexxa sales are soft this year due to the pandemic, I expect a strong rebound in 2021 and significant growth acceleration in 2H 2021 and 2022, driven by positive MIRROR study results and label expansion.

As a side note, I was previously bullish on Selecta due to SEL-212’s potential but I removed the stock from our Growth Stock Forum model portfolio two years ago due to positive Krystexxa plus methotrexate data which changed the thesis on Selecta.

In the meantime, we should see continued strong growth of Tepezza and increased M&A activity since Horizon raised $919 million in net proceeds with the purpose of doing more transactions. The cash raised gives Horizon a pro-forma end of Q2 cash balance of around $1.6 billion, and quarterly cash flow generation should pick up in a meaningful way as well in the following quarters and I believe Horizon will have more than $2 billion to spend on M&A by mid-2021 and that’s without raising additional debt or potentially utilizing equity for larger transactions. However, I think Horizon will generally stick with what works – low risk, high reward transactions like Tepezza (teprotumumab) where the company in-licensed the product for $145 million upfront, and more recently the HZN-825 acquisition for $45 million upfront.

I publish my best ideas and top coverage on the Growth Stock Forum. If you’re interested in finding great growth stocks, with a focus on biotech, consider signing up. We focus on attractive risk/reward situations and track each of our portfolio and watchlist stocks closely. To receive e-mail notifications for my public articles and blogs, please click the follow button. And to go deeper, sign up for a free trial to Growth Stock Forum.

Disclosure: I am/we are long HZNP. I wrote this article myself, and it expresses my own opinions. I am not receiving compensation for it (other than from Seeking Alpha). I have no business relationship with any company whose stock is mentioned in this article.

Additional disclosure: This article reflects the author’s opinion and should not be regarded as a buy or sell recommendation or investment advice in any way.