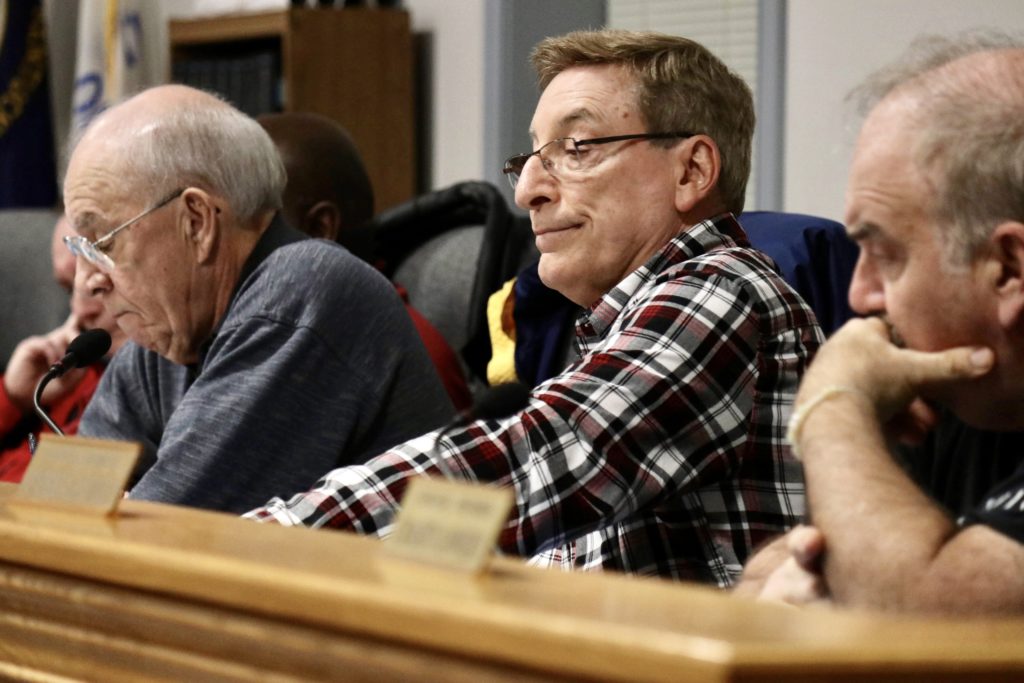 Wendell Honeycutt, center, turns off a microphone after he finishes speaking to the Glasgow City Council on Jan. 27, 2020. Marlin Witcher, left, and Patrick Gaunce, right, listen.

Angela Briggs and Brennan Crain contributed to this report.

“You’re not going to be able to avoid a vote on this,” said Wes Simpson, the chairperson of the Downtown Park Steering Committee.

The steering committee was developed by the city of Glasgow to advance the idea of a private-public downtown city park. Simpson brought the idea to the Glasgow Council in July 2019, which has sought to investigate the idea before they consider an investment.

“I could care less about voting,” exclaimed Harold Armstrong, the mayor of Glasgow.

The exchange between Simpson and Armstrong was sparked after a long-awaited finance committee meeting. Park supporters and community members expected the committee to discuss whether the city of Glasgow could fund a portion of the proposed downtown park project. It was not the first time park supporters appeared before that committee.

Supporters argue the city ought to make such an investment, especially since private donors have pledged to contribute over $1 million. Those opposing it reason the city does not have the capital to support the project. The meeting was held to provide clarification.

Wendell Honeycutt, a councilperson and chairperson of the city’s finance committee, called the meeting to order and said discussion about the park could not be held since the committee had not heard from the contractor interested in completing the project and what information the committee could discuss in a public setting. The Glasgow Council held a closed session discussion about a design-build proposal submitted by Scott, Murphy and Daniel Construction, and the Kentucky Attorney General’s Office opined they violated the law.

Simpson had emailed Danny Basil, the city’s attorney, and communicated what details the company preferred to keep private from the public. He also forwarded that email to the committee members, and it was read by the chairperson at the Tuesday meeting.

“We requested the meeting to assure Scott, Murphy & Daniel’s proposal remains confidential within a public discussion,” according to the email. “This would include the design drawings, as well as the scope of work.”

Honeycutt said the email was not clear enough for the committee, and Simpson reasoned the price of the project, which would be the finance committee’s main concern, has never been a private matter.

The latest estimate attached to the park’s development and construction is $2.2 million, which Simpson has publicized in a series of videos posted to social media. The steering committee estimates the city’s portion will be approximately $1.1 million.

Scott, Murphy & Daniel Construction estimates they could complete the project for $2,239,620, according to the construction proposal obtained from Glasgow City Hall.

Simpson offered to call a representative from Scott, Murphy & Daniel Construction to further clarify the details the committee was permitted to discuss. He also said he would instruct Jason Halligan, the steering committee’s attorney, to send an email requesting that the price be included in the permissible items for discussion. He left the room to make that call.

The committee continued with other agenda items, which included discussion about the city’s actual cash on hand and the hiring of a position not originally detailed in the city’s budget.

Honeycutt asked Stephanie Garrett, the city treasurer, to provide an “income and expenses” report, which is a document that analyzes the cash flow of an institution. Garrett did not bring that document to the meeting but instead brought a financial report, which did not contain information about the city’s immediate liquid assets.

Councilperson Patrick Gaunce asked for the cash on hand value several times before the treasurer revealed it.

“I’ve asked for exactly how much money we have on a daily running balance and how much interest we had made off of our money over the previous nine months,” Gaunce said.

Garrett said the city’s average daily balance of cash on hand is about $14 million.

The committee also discussed the hiring of a new human resources position, which was not approved this fiscal year. The position was filled anyway, and the treasurer said a budget amendment will likely need to be approved by the Glasgow Council.

Simpson returned to the room after these discussions. Honeycutt and Marlin Witcher, another finance committee member, voted to adjourn the meeting at that time. Councilperson Chasity Lowery voted against the adjournment.

Simpson revealed Halligan was sending documents to him to corroborate what the construction company had approved for discussion outside of their presence. Witcher and Honeycutt continued to leave the meeting chambers.

“Obviously, they ran out of here as fast as they could just to stall a whole other round of committees,” Simpson said. “I think that says all it needs to say to the entire community.”

The finance committee said they would have another meeting to discuss the park project, but no specific date was given.