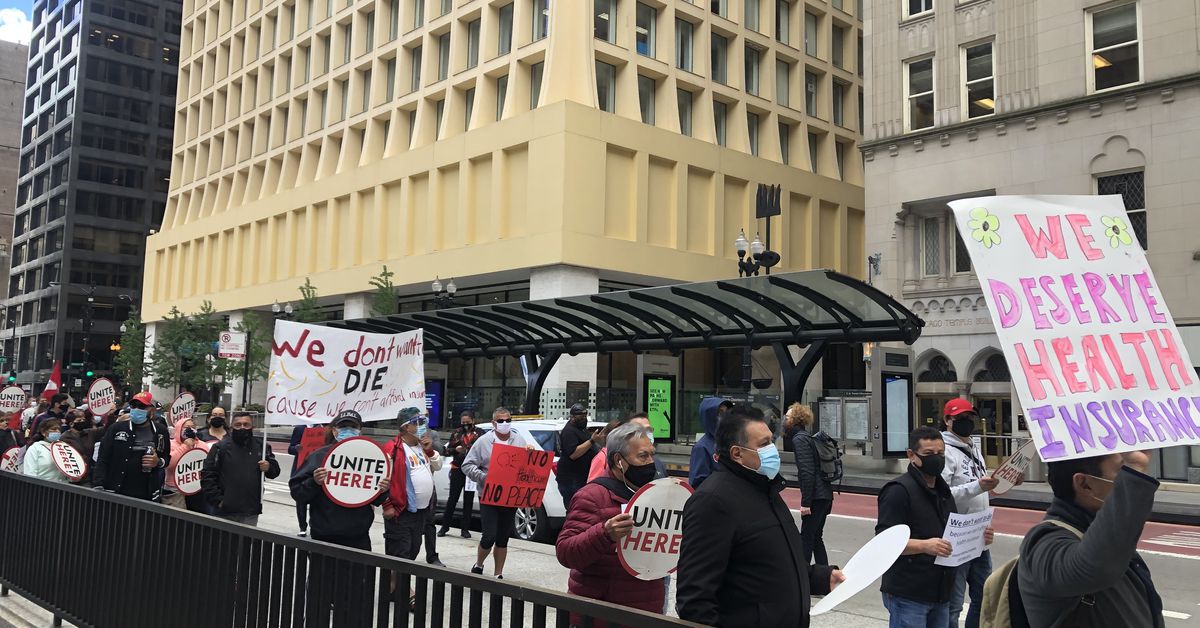 Friday morning, more than 200 Chicago hotel workers and supporters took to the streets as a chilly breeze swept through Daley Plaza.

The action organized by Unite Here Local 1, which represents workers at 51 hotels across the city, was in support of the nearly 7,000 Chicago hotel workers who remain laid off due to the pandemic and are at risk of losing their health insurance at the end of the month.

The rally, which lasted roughly two hours, began at Daley Plaza before participants marched through downtown streets, then returned to the plaza. Chicago police officers blocked intersections for the parade of protesters as they paraded through the streets.

It’s difficult for workers to pay medical bills when it’s unclear when or if their jobs will return, said Sarah Lyons, spokeswoman for Unite Here Local 1.

A recent study by the Economic Policy Institute found that up to 12 million Americans may have lost their employer-sponsored health insurance during the pandemic. And almost half of the 16.9 million jobs in the U.S. hospitality sector were lost in March and April. As of September, more than a quarter of workers in that sector remain unemployed.

The hotels have not been paying their share of employees’ health care premiums since March, Lyons said — a position disputed by a Hyatt official.

Hyatt Hotels “continues to support our employees during this difficult time, and their healthcare remains a primary concern,” said Michael D’Angelo, Hyatt’s vice president of labor relations. All Chicago Hyatt hotels, he added, “have regularly contributed to health benefit funds that support their colleagues who are members of Unite Here Local 1, and those funds have a surplus. It is our understanding that the Employer Trustees of the health benefit funds voted to extend coverage through the end of September 2020.”

D’Angelo did not comment on the status of health coverage beyond September, but did add that Hyatt will “remain committed to engaging in dialogue with Unite Here Local 1.”

Local hotels under the ownership of Marriott International and Hilton Worldwide did not respond to requests for comment.

Paulette Robinson has worked at the W Chicago City Center hotel for more than three years and spent another 10 years working for other Marriott hotels. She can’t understand why companies are letting workers’ health insurance expire during a national public health crisis.

“I guess they’re waiting for us to die,” the Chicago native said. “They should have some sort of empathy, especially because they took our jobs. They could at least help us with health care during this time.”

Hotels have been slow to bring back many laid-off employees as the industry continues to be devastated by drops in tourism and travel resulting from COVID-19. The room occupancy rate in Chicago in August was 37.5%, a 52.5% decline from pre-pandemic rates, according to STR, a hospitality data research firm.

The American Hotel & Lodging Association supported the original stimulus, as did many of the nation’s largest hotel chains, and much of the money available to them was used to pay staff salaries. This is why Unite Here believes the money should be used to contribute to workers’ health coverage.

“These companies made millions of dollars pre-pandemic off of our labor and hospitality and also received a bailout,” says union member and Southwest Side resident, Robert Hudson.

“So I don’t understand why it’s such a hassle to actually protect these people during a world health crisis,” he added.

For workers, the access to health insurance is a matter of life and death, just as much as it’s about respect.

“They’re just throwing gas on the fire,” says Robinson. “I’ve already lost two of my cousins to Coronavirus and this is just like a slap in the face. They don’t even know what they’re doing to us, they don’t really care.”