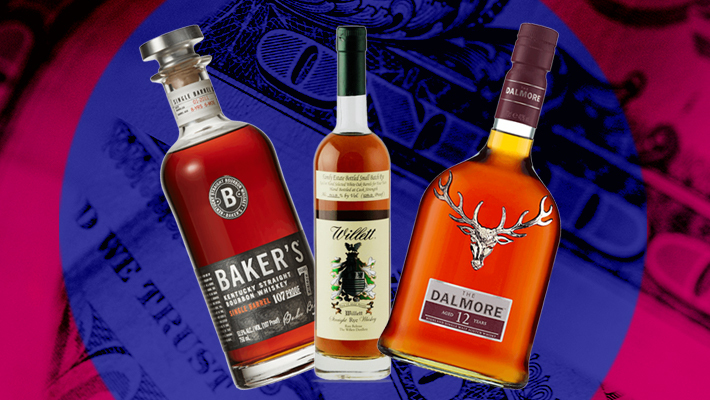 Christopher Osburn has spent the past fifteen years in search of “the best” — or at least his very favorite — sips of whisk(e)y on earth. In the process, he’s enjoyed more whisk(e)y drams than his doctor would dare feel comfortable with, traveled to over 20 countries testing local spirits, and visited more than fifty distilleries.

If you’re not worried about price, you can pay a lot of money for whisk(e)y. From Pappy Van Winkle to the Buffalo Trace Antique Collection to long-aged Scotch whiskies, you can easily spend the equivalent of a month’s rent (or more) on a highly prized bottle. Also known as “unicorn whiskeys,” these hard-to-find expressions often feel lightyears out of reach to the average drinker.

Today, we’re here to tell you not to fret about missing out on that bottle of A.H. Hirsch Reserve that randomly materialized at your local liquor store. There are tons of great bottles (in the $50-$75 range) that taste a lot more expensive than they are. Check out my personal favorites below.

Ask any bartender about the best sipping Scotches and they’ll likely put The Balvenie 14 Year Caribbean Cask on their list. This Speyside single malt was first aged in oak barrels before being finished in rum casks. The most interesting thing about this sweet, rich whisky is the fact that the brand didn’t grab just any rum for this offering’s finish. They actually created their own blend of rum and added it to barrels. Later on, it was removed and this whisky was added.

If you take the time to nose this whisky before sipping, you’ll be met with the initial sweet, sugary flavors of islands-style rum. These aren’t the usual first aromas associated with Scotch. The first sip imparts caramelized sugar, creamy vanilla, dried orange peel, and sticky toffee pudding. The finish is long, lingering, warming, and filled with subtle cinnamon and sweet butterscotch notes.

This sweet, rich, fruity whisky deserves to be sipped in a Glencairn glass with a few drops of water to open it up and add to the taste experience.

Named for Baker Beam, the grand-nephew of Jim Beam, Baker’s Bourbon is one of Jim Beam’s Small Batch Collection whiskeys. It’s a single barrel bourbon that spent seven years aging in the Jim Beam Barrelhouse. Part of the appeal of this brand is the fact that Baker’s is made without batching or mixing together various barrels. It’s literally made from one barrel and this means that the whiskey inside will always taste at least subtly different from the last time you bought it.

Like many whiskeys, when you nose Baker’s, the first aroma you’ll notice is that of the musty rickhouse itself. This is followed by cinnamon and sweet, dried cherries. The first sip is undeniably smooth with hints of rich vanilla, charred oak, and caramel. The finish is long, warming, and ends with toasted caramel and just a hint of spice.

Sometimes high proof means harsh. But that’s not the case with Baker’s. This 107 proof whiskey is mellow enough to be sipped slowly with a single cube of ice in a rocks glass.

When it comes to Scotch, there are a lot of great 12-year-old whiskies on the market. One of the best is The Dalmore 12. First launched back in 2008 to replace the brand’s original 12-year-old, this version is matured for 12 years in ex-bourbon American oak barrels before being finished in Oloroso sherry butts. The result is a sweet, complex whisky that is worth way more than its price tag.

Like all great Scotch whiskies, this expression requires a nosing before taking a sip. If you do that, you’ll be met with hints of candied orange peel, cinnamon, and sweet caramel. The first sip delivers hints of chocolate, toffee, sweet sherry, and charred oak. The finish is verrrrry long, full of warmth, and ends with a caramel flourish.

Like all the whiskies on this list, The Dalmore 12 should be enjoyed as the distillers intended. Simply pour the juice into a Glencairn glass and sip on it to warm you on a cool, fall night.

If you’re new to the world of rye whiskey and you can find a bottle of Willett Family Estate 4 Year Rye, buy it. It’s cask strength, full of peppery spice, and somehow only around $50 dollars. It’s the perfect gateway rye for fans of bourbon and would still sell if Willett increase the price (here’s hoping that they don’t).

If you’re only going to nose one style of whiskey, make it rye (and this one in particular). You’ll be met with hints of subtle peppery spice along with dried cherries, cinnamon, and butterscotch. The first sip drops notes of white pepper, sweet vanilla, charred oak, and just a hint of fresh mint. The finish is long, warming, and filled with candied orange peel, vanilla, and just a dash of spice at the very end.

Stock up on this rye, you’ll want to spend the rest of fall (and much of winter) sipping on this subtly spicy, well-rounded whiskey.

Redbreast 12 is the brand’s signature bottle and well worth the $50 dollar price tag. In fact, with its complex, well-rounded, robust flavor we’d be willing to pay way more for this unique offering (but we don’t want to). This triple distilled Irish whiskey is made with both malted and unmalted barley before aging in a combination of ex-bourbon American oak barrel and Oloroso sherry butts.

While nosing, the first scents you’re greeted with are rich honey, sweet sherry, dried cherries, and cinnamon. The first sip brings forth candied orange peel, toasted marshmallow, and toffee flavors. The finish is long, warming, luxurious, and ends with an added kick of peppery spice.

This sweet, rich, well-balanced whiskey should be paired with plate of bangers and mash, a warm blanket, and a chilly evening.

This “Prohibition Style” bourbon was made as a reference to the passing of the Volstead Act in 1920. The reason for this homage is because, during Prohibition, Old Forest didn’t shut down. Instead, the distillery made bourbon for “medical use.” To fit that distinction, this bourbon needed to be bottled at 100 proof.

In 2020, this whiskey enters the barrel at 100 and ends up at lofty 115 proof after maturation. It’s a true throwback expression — one that deserves a place on your liquor cabinet shelf.

The first aromas your nose is met with are charred oak, dried cherries, and brown sugar. The first sip drops hints of fiery cinnamon, toasted oak, sweet caramel, and burnt sugar. The finish is long, warm, and filled with more caramel, and a subtle hint of barbecue smoke.

When you crack open this bottle, pretend like it’s still Prohibition. Drink it in private in a dimly lit room in front of a roaring fire on a cold night.